Jasna Veličković is a Serbian composer and performer based in Amsterdam. Her recent works such as Last Song, Ombre…moi non plus and Shadow Studies focuses on sound extension of traditional instruments. Her music material often derives from existing music pieces shadowing or looking awry to the original. Most recently she is building a new performing setup made out of permanent magnets and coils. This project is a new installment of her ongoing artistic research whose aim is the creation of tools that facilitate playing on instruments or objects using the transformative acoustic possibilities of electromagnetic field. 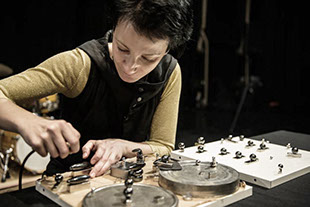 Jasna Veličković studied composition at the Faculty of Music in Belgrade with Srdjan Hofman then continued her postgraduate study at the Royal Conservatory in The Hague. She studied with Louis Andriessen, Gilius van Bergeijk and Clarence Barlow. In 2004 she graduated with distinction. She won the 28th Irino Prize (2007) in Tokyo, Slavenski Award (1998), the first prize at the 5th International Review of Composers in Belgrade (1996). She was nominated twice for the Mokranjac Award (2001, 2006). In 2012 she was a finalist of the ECPNM Live-Electronics Competition. Last Song (for percussion quartet) was nominated for the Dutch Toonzetters Award (2011) and received a "recommendation" at the Unesco Rostrum of Composers (2011).