Violet Fall is an electronic music band founded in Amsterdam in April 2014. The project blends together dry sounds and groovy beats of digital and analog instruments with the inputs and creativity offered by musicians coming from a diversified scene. 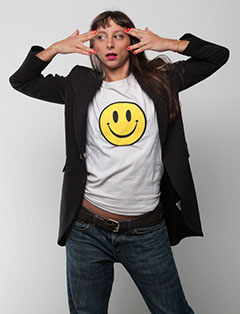 Elisa Batti (NL/IT), a composer and producer of electronic music, is behind the scenes of the project. She strongly believes in the contamination of disciplines and drove the project towards a platform that includes different musicians. For this set at Kernel Panic, Violet Fall will be represented on stage by Elisa Batti.

Since its debut album, Violet Fall has been actively playing and touring in the Netherlands, Germany, France, UK, Japan.  Their live set is pleasantly flexible: suitable for a dance scene as they have been playing in venues such as Trouw Amsterdam or Liquid Room in Tokyo, but also for art oriented events such as the Kinetika Art Fair in London.