Cello and Notesaaz: a string duet

Cello and Notesaaz: a string duet is a conversation between two storytellers through sounds, gestures, changes, repetitions, moments, and flows. It invites you to observe the flow of repeating events as they change. How far should something change before it becomes something else?

Wen Chin Fu is a performance artist from Taiwan. She is interested in the relationship between sound and body behaviour in a performative way. After graduating in classical music, she chose to study at ArtScience Interfaculty at The Royal Art Academy in Den Haag, Netherlands. She currently lives and works in Den Haag. 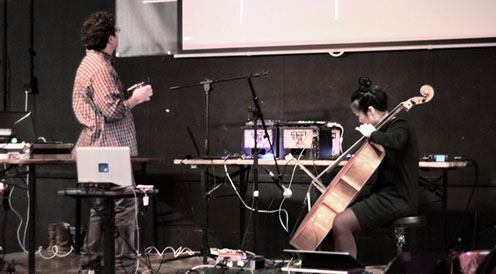 Erfan Abdi (1983 – Tehran) is an artist, designer, and performer based in The Hague since 2009. He graduated from the Masters program at the Artscience Interfaculty, Royal Conservatoire The Hague in 2011. Erfan researches the concept of active perception in the context of performing arts, and studies the interactions between performer, instrument and audience.