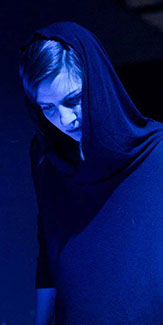 Mári Mákó is a sound and performance artist. In her solo pieces she has been mostly experimenting with live electronic semi-improvisation. However for this event she is going to premiere her new performance, which has fixed compositional aesthetics but at the same time some segments of fragility. Expect beat orientated industrial sonic world combined with the sound of a processed zither and heavy voice distortion.

Mári is currently studying at the Royal Conservatoire of The Hague Composition Department Master Program and she is working on releasing her very first album in the near future.