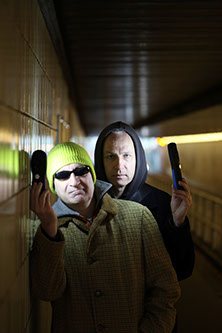 Foto by Dieter SchutteMensimonis is the coming together of two counterfigures in counterculture; Radboud Mens and Lukas Simonis. Although the two gentlemen liked and knew eachother for some time now, this teaming up was not the most obvious thing to do. Radboud coming from electronic/industrial/noise music, being a sort of whiz-kid in the studio and in general a controlfreak who doesn't like things to slip out of his hands, and Lukas, with a background in noise and improv and ecclecticism in general (all projects he does seem to come from a totally different source...).

Lukas and Radboud met up musically a few years back when they were doing recording & improv workshops for Secondary Schools (VMBO mostly) and in the end found themselves together on the stage where they played noisy improv music for teenagers that would rather watch a stupid game on their iphones... (well, the teachers that accompanied them were not much better). So this must have been the starting point that lead to the project (or is it a band) Mensimonis.

Mensimonis try to do a 'musical' thing with the idea of droning away at it. It seems a very simple and basic concept but it always leads to quite different results. Radboud takes care of the lower parts of the sound, using oscillators and effects, Lukas is allowed to stay on top with an accumulation of looped guitarattacks that slowly evolve into drones as the overtones take over. That's only the description of HOW to make these sounds..